Home/Hats Off to Melbourne with Edwina Noll
Previous Next 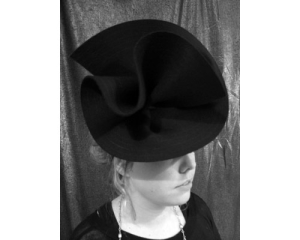 How is millinery a part of your life?

Millinery is very important to me. I have always loved fashion and after working in a hat shop and oggling beautiful head wear everyday I thought I might give millinery a whirl. I only started learning the craft 18 months ago and have to travel to Melbourne from Albany to do so as there is no one teaching it here in Western Australia. So I completed a two-week intensive with Louise Macdonald, thoroughly enjoyed that and have been having fun ever since.

How did you hear about the Hats Off to Melbourne convention?

I heard about the convention at the Wagga Wagga Millinery conference in February this year.

So you decided to go to the convention, what did it involve?

The convention was held over six days, located in the Melbourne suburb of Brunswick at the RMIT University campus with a large selection of morning and afternoon workshops to attend. There were also talks by prominent milliners on most evenings. During the week there was the chance to go to a trade day, a cocktail party and gala dinner.

What workshops did you do?

What social events did you attend?

I started the convention week at the cocktail party. It is always so interesting to see people in millinery creations of their own. The hats often tell you so much about people’s personalities and interests before you even get a chance to have a chat with them. The cocktail party was at the Victorian Artist’s Society in a beautiful room surrounded by fantastic artworks and a display of vintage hats. We sipped wine and chatted as a very talented pianist played in the background. I had a ball, tripping out the door quite merrily with my goody bag later that night.

The Gala Dinner and Parade were at the Sofitel Hotel in the middle of the city on the Sunday night. Beautifully produced, the evening went like clockwork. The parades were great fun to watch and Lee Lin Chin (a very funky Australian evening TV news broadcaster, we have a bet every night at my house on what colour glasses she will be wearing that night) gave an excellent talk on the history and future of millinery. Everyone who attended looked very glam and obviously enjoyed the night.

The trade day was a very social event as well. Quite often you only converse with suppliers on the phone or by email, so to meet them in person is fabulous.

Who did you meet?

I met so many talented and delightful people at the convention from all over the world. I could go on and on…

Meeting Edwina Ibbotson from London was a highlight; she holds a wealth of knowledge about her craft. Her hats are impeccable and she is a really nice, (as we say in Australia) top chick.

Milliner Jay Cheng and her husband Frank from Hong Kong may be the coolest couple on the planet. Jay gave a great talk on her career, screening photos of the many Asian pop stars who wear her creations. Having worked as a stylist, Jay has a fantastic ability to think outside the square when it comes to head wear.

It was the look behind the scenes at the National Gallery of Victoria that was the absolute highlight of my time in Melbourne. The gallery has an extensive selection of International and Australian designer hats in its archives. Otto Lucas, Lanvin, Yves Saint Laurent and Stephen Jones featured in the International collection. The Australian designers included Thomas Harrison and one of my favourites, Richard Nylon. Surrounded by many other boxed treasures in the viewing room, we even got a peak at an original Fortuny dress from the 20s and a few other treasures.

I loved being at the convention. It was a fantastic chance to socialise with people that share the same passion as you and learn more about millinery at the same time. Bliss!