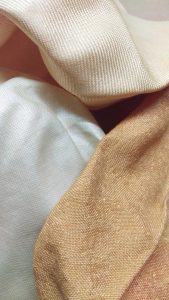 Fred Ruegger is an expert at importing parisisials, some fine quality sinamay but his love is with the pari sisals.  Fred has recently returned from a trip to China where he visited his suppliers.  The companies he sources from was once run by a Government Corporation but now is through other companies.  Having been in contact with the same supplier since the early 70s, Fred comments the original owner could have well have passed on and now they are speaking with his son.  This supplier make mass production pieces for larger UK retailers and have become a large supplier of street wear hats but also supply the raw materials which Fred is known for importing to the UK and supplying around the world.

Fred took over the business from his father and in 1985 Fred went to the factory that produced Parisisals with his father.  The business has been and remains located in Luton, a hat manufacturing and supplier hub for England and the UK.

The makers of the parisial hoods located in China are mostly workers out in the field completing the hand weaving with a certain amount of processing such as pressing completed within a factory.  The process for the on sale of the raw parisial hoods is much less regulated than it once was. China once purchased the  raw materials from Philippines and  Arts and Craft Council in China controlled raw material supply and would manage the on-sell of the woven product.

Discussing the change in quality of straw Fred comments the economic boom is China has played a large role, these items are done as an extra for farmers in the evening rather than a main source of income.  Taking over 25 hours to weave one sleeve, calculating the wholesale cost of a parisisal reduces it down to pennies an hour. Now the weavers pick up the raw product and are sourcing the highest rate they can receive for the end product.  The quality of a final product is said to be a split of 95% weave skill and 5% quality of material.

Discussing the grade of parisial, the scale which use to exist from 1-5 with the expectation of a quality level 2 or 3.  Now a grade 1, or grade X is about the same as the old scale grade 4.  Mr Ruegger took us on a tour of his storeroom and shared samples of gorgeous straw that can now only be sourced as a second hand piece, retrieved from old pieces.  A straw from half a century ago against modern straw displays this stark contrast (see image).

For Mr.Ruegger it always comes back to parisisal for he knows the product well and what the finest quality is possible he can strive to obtain.