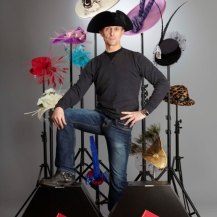 I was introduced to hats as a child, going to the family factory and working on the eyelit machine or flower press at the ripe old age of 7. But I first really appreciated a hat at a cafe by the Thames barrier in Greenwich, London. A young man and woman walked in… Nothing particularly unusual, but both wearing hats. And they looked hot… The hats did it.

Where and how did you learn millinery?

I had a fair grounding in the blocking room by the time I was 14, but wasn’t allowed to be near the sewing machines. I would copy the milliners by sewing clothes for my “Action Men”… Ah, sweet… My proper time came when I was tutored at the London College of Fashion by Madame Marie O’Regan, a great great milliner who encouraged me to focus on line and allowed me on the sewing machines at last. I discovered that I really could embrace creation and also that “hand wiring” is a real chore.

Where and how did you learn millinery?

I had a fair grounding in the blocking room by the time I was 14, but wasn’t allowed to be near the sewing machines. I would copy the milliners by sewing clothes for my “Action Men”… Ah, sweet… My proper time came when I was tutored at the London College of Fashion by Madame Marie O’Regan, a great great milliner who encouraged me to focus on line and allowed me on the sewing machines at last. I discovered that I really could embrace creation and also that “hand wiring” is a real chore.

How long have you been a milliner? Where else did you work?

I have been working in Luton [Bedfordshire] for 27 years, since my first felt hat trimmed with leather and pheasant feathers. I worked my way through all the departments, taking on the management of the firm since 1990 and finally buying my father out in 1999.

Where do you get inspiration for your designs?

People… people… people… My private customers come to me, and I try to translate into a hat their personality and message, along with taking into account where, when, what and with. So many stories and faces and personalities, so the catalogue is endless. I have worked with and around hats all my life, so what they can say is like a tangible second language which I grew up with, though I guess looking at pictures from the past… particularly the 40s, 50s and 80s gave me the line and form that I find I like to use to make my customers’ posture and profile stand out.

Oh, Blimey… When a shape is so new, then that is always the one I love best, till the next one is created… the next day. A lady had such a large headsize, she had never worn a hat in her life, even as a child. Her head was 66 centimetres. To make the crown and brim fitting and to keep the trimming in balance was a challenge. The lady was so happy she cried…

Made a felt hat for a lad who was building a wardrobe for the weekend. The brim was huge and had to stand up to the pub. It looked really good… Wonder if he still has it? One client, who I nicknamed the “fairy godmother”, had real taste. Her clothes, which she had made in Paris, were subtle and tailored with always a surprise. To make a hat to coordinate was fun. Slightly theatrical, but tailored and with sharp line… then just a touch of quirk.

I always try to make a hat that makes the client look sexy by enhancing the face, the eyes in particular, and then to bring something extra to their posture or stance. So most of my hats will have brims, with the odd exception. Flamboyant… Subtle… My style… But when I see other milliners’ work that is so intricate and dainty, which I admire so much, then I am not sure. Fun and flattering?

Who do you make hats for? Churchgoers? Brides? Everyday wear?

All of the above. Mothers of the bride and groom are my bread and butter, though I make hats for “school crossing patrol”, staff, air stewardesses, historical reinactment, morris dancers, goth and burlesque, daywear in the pub, club and office, Ascot and the races. Ladies who hold an office, such as high sheriffs (they can be fun as they want something that conforms, but then doesn’t), leather hats for outdoors, gents who like to dress as ladies. Always a new challenge… Always a new story…

What materials and techniques do you favour?

Because of my upbringing I think I will always think of a blocked hat first, rather than cut and sewn. So, if it can be blocked, then I use it, which leaves me with a lot, though I like to work with silk over buckram. I “luvvvv” fur felt and fancy panama, leather in the trim. As long as the hat lasts… Sinamay because of its ease to form and sisal straw. Once the hat is blocked, then it is by hand. I have just got into painting the hat with a secret, then a little applique.

Do you have any other interests, hobbies?

My life is my hobby… After my nervous breakdown (well, we all have those now, don’t we…), I rediscovered that I love to write… Poems, stories inspired by those around me… To be spontaneous, so unfortunately I cannot say that I sail. I like it, but not a devotee.

I like to meet people and hear their stories and wherever possible add a little flamboyance to the dress code. I find that, in the past 3 years, there is always the next show or project that I concentrate on, involving the collection, the stand, the customer, the logistics. Valerie [Corona; read interview], my partner, friend, girlfriend, is a great source of inspiration and apparently I am for her.

I like flowers and gardening, though couldn’t recognize a flower by its Latin name. Tut tut.. French films (they have a depth that Hollywood isn’t so concerned with), visiting antique shops, touching the objets d’art… and gazing at buildings, imagining how it was that they were first created on paper and then the sweat and pain to build them. Oh and luggage… I “luvvvv” luggage, especially leather.