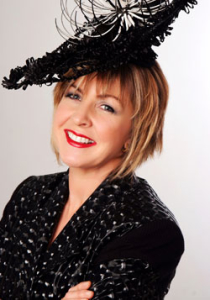 My husband has been a mad keen punter since I have known him, so we regularly went to Melbourne’s racetracks often watching some very slow horses Steve owned. So I wore hats to the races (not very good ones, but none the less headwear of some description). Looking back at old photos from when I was a child I had always worn hats. After the birth of my daughter Emma I needed to find something for myself where I wasn’t an employee or a mum, just me.

Where did you learn millinery?

One day when reading a newspaper I found an advertisement for a millinery course, one night a week for six months. My first teacher was the one and only Peter Jago. That was back in 1993 and with Peters’ enthusiasm I was hooked. I spent 3 years under the tutelage of Waltraud Reiner, who, as well as teaching technique, encouraged me to find my own voice in design. I have been lucky enough to also have had lessons from Louise Macdonald, Marea Bright, Doris Chivers and other amazingly talented Australian milliners over the years. So since 1993 I have learned the art of millinery and in 1994 began my own label, beginning with selling my creations at markets. This later led to taking over a studio space at the Meat Market Craft Centre in North Melbourne for 4 years, surrounded by artisans and craftsmen from all over Australia. From North Melbourne I moved to my current shop in Elsternwick, where I have been happily creating my hats for the last six years.

I’ve been asked to do some crazy headwear in the past. Last year I did some headwear for a stage production at Jupiter’s Casino that included pieces to be worn in a high wire act which was challenging. I get the most enjoyment though out of making special occasion hats for clients who I’ve known for years who bring in their outfit and just trust me to ‘come up with something’.

My hats have simple lines and minimal trims with a tendency to have feathers featured.

Who do you make hats for? Church goers? Brides? Everyday winter wear?

Because of my association with horse racing you will find my clients are mostly race goers whether they are from Dubai, where I go each year to sell my hats for the Dubai World Cup, or around Australia. I also have a healthy share of ‘mother of the brides’ and make handmade flowers. I love to use straw cloth (laize) and vintage racaello straws. The texture of these materials is the attraction.

What materials and techniques do you favor?

I love to use feathers and different textures so often it is a case of experimenting until you get something wearable.

On the home front I have a long suffering husband (Steve) and a 15-year-old daughter (Emma). So I spend a great deal of time watching junior netball and basketball. We own a bottle shop so I can often be found behind the counter serving customers, of course wearing a hat which gets some funny looks. We are members of both the VRC (home of the Melbourne Cup) and MRC (Caulfield Cup) and a long suffering member of the Collingwood Football Club.