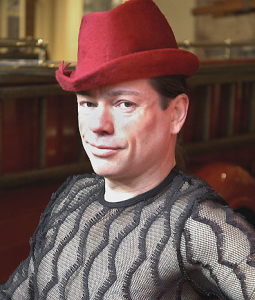 Paris Kyne started in the millinery trade 16 years ago, firstly as a hat blocker for Melbourne hats back when they were in Collingwood. Then he moved on to take a job with William Beale is a milliner where he stayed for two and a half years untill Mr Beale passed away. So time to move on again, this time to Martin Penner which was still in Flinders Lane at that time, He stayed there for two or so years as artistic director, then took a few months off. Next it was time to open his own bussines, so he purchased Helen Mobray Millinery in Malvern, renovated and opened Michael F Kyne THE MILLINER, which he ran for six years untill he moved the bussines to Toorak Village five years ago where he re named it Paris Kyne THE MILLINER. The next change occors on the first of May, another revamp and compleat over hall.

The main inspiration for his work comes form the Art Nouveau movement which he studies.

The most enjoyable commission is also the one that was the most fun, the Nicky and Paris Hilton hats for Darby day 2003. The white pick-a-boo Paris Hilton is now in the collection of the Australian Racing Museum, and now on display at Fed Square, Melbourne. Everything about the Hiltons is a party and their visit to the salon in 2003 was a party.

The Paris Kyne style can be described as clean lines, no over embelishment. The shape of the hat or headpiece can speak for itself and the trimming should always evolve and grow out of the work not look like an afterthought.

The Paris Kyne client is mainly a race follower, thougth Jewish and other Religious clients form part of the client base. Favored materials include wire, feathers and felt. Techniques would include blocking on any of the 702 hat blocks in the collection and shopping (shopping must be a techniqe somewhere in the world)

The exhibition  “The Master Milliners Muse” was be held in September, 2005 at Tasma Terrace. It looked at 13 pieces all commissioned by one client over the last 13 years.