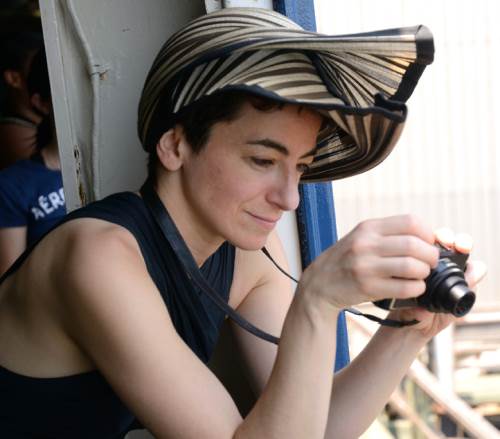 Since the age of 11, I wanted to be a fashion designer. Right out of high school, I was accepted into a fashion design program at the Otis-Parsons School of Design in Los Angeles (United States). I didn’t want to go to LA, so I chose my backup school where I studied liberal arts at the University of Michigan.

In my junior year, while studying art history and studio arts in Michigan, I took a theatrical millinery class and was hooked! That’s when I decided to immediately move to New York City to study hat design at the Fashion Institute of Technology (FIT).

Since the age of 11, I wanted to be a fashion designer. Right out of high school, I was accepted into a fashion design program at the Otis-Parsons School of Design in Los Angeles (United States). I didn’t want to go to LA, so I chose my backup school where I studied liberal arts at the University of Michigan.

In my junior year, while studying art history and studio arts in Michigan, I took a theatrical millinery class and was hooked! That’s when I decided to immediately move to New York City to study hat design at the Fashion Institute of Technology (FIT).

Please describe the first hat you made.

I sewed up a beret out of a skirt that my grandmother had made for me out of dark green patterned silk velvet patchwork. The hat was just a circle and a band, but I loved it. I wore it to a music show and hid it in a speaker while I danced. At the end of the night, it was gone. I had the entire staff looking for it, but someone had stolen it during the night.

Where and how did you learn millinery? Where have you worked?

After my first millinery class at the University of Michigan, I started selling my hats at a local artisan’s market on the weekend. While still living in Michigan, I set up an assistantship in New York with Rod Keenan, a men’s fine milliner. He hand-blocks and hand-stitches his hats, so I got an amazing background there for a year while taking a millinery class at FIT.

Rod connected me to other milliners to work for, like the great theatrical milliner Woody Shelp. I’ve also worked for James Coviello and Tracy Watts when they needed some extra hands. Working for others is the best way to learn a skill.

I freelanced as women’s hat designer for Goorin Brothers for two years. It was great to be able to make production-ready patterns for cut and sewn hats, then see them produced on a large scale. It made me realized that I love making patterns and prototypes.

What are your recent projects?

Sometimes you have to make something because it’s a vision you have. Even if it’s not going to be part of a collection that you’ll take orders from. Right now, I’m working on an exciting collection of aquatic leather cocktail hats with abalone, coral and feathers because I want to make a new photo shoot.

I started working with the leather 10 years ago and am continually fascinated by it. It’s strong, textural and down-right gorgeous. I just recently started working more with sting ray, though it’s very hard to block. I wear a metallic lilac fish skin helmet nearly every day when the sun isn’t out. It fits perfectly under my bicycle helmet.

I’m also waiting on a shipment of 12 metres of jinsin straw to make sculptural hats for summer and the races. I’ve never been really into using trim like ribbon and flowers (I use them sparingly). I like to rather work with the material and form interesting, unconventional shapes.

Where do you get inspiration for your designs?

I get my inspiration from everywhere: outerspace, ocean life, historical figures, the art déco era… I distill shapes from history and transform them into futuristic and glamourous cloches, berets and helmets. I watch so many 1930s and 40s films; my favorites are listed on my blog.

What materials and techniques do you favour?

Draping and blocking! I love draping materials like parts of cashmere sweaters, straw and felt directly on my head. Funnily enough, when I sell my hats at craft shows, people always say, “They all look good on you!” I say, “I won’t make a hat that I don’t like and doesn’t look good on me”. I’m my own customer.

The passion for your millinery will show through the pieces you create and love. I love blocking felt “freeform” style on a standard balsa hat block, because the possibilities are endless and sometimes you come up with something totally unexpected, something that the felt suggested to you.

It’s important to produce locally. Recycle and reclaim as much as possible to lessen the load on earth. I use cashmere, kimonos, men’s blazers, fruit bags, fishskin that would’ve gone into landfill had it not been tanned, and off-cuts from other designers. I try to be as sustainable as possible, doing a lot of hand-stitching instead of using the sewing machine.

A year ago, a local Belgian photographer commissioned me to make 6 dramatic black and white hats. He gave me artistic rein as to shapes and materials. I used jinsin, paris cloth, tulle, aquatic leather and pleated crinoline in the collection.

Japanese minimalism crossed with Scandinavian modernism. I grew up in Japan for 4 years as a child and spent half of my formative years in Iceland. I’m heavily influenced by the art déco era. Sometimes I think I was a milliner back then because nearly every material I touch I unconsciously form into art déco inspired headwear.

Who do you make hats for?

I make mostly everyday wear, but I love making dramatic sculptural confections for evening and the races. Hats are icebreakers since people are becoming more shy with their tech devices. Hats are comfort and protection in an unstable world. Fashion can enhance your well-being.

Who would you love to make a hat for?

Lady Gaga and Björk. They both like to take chances and look different from everyone else. My customer does too!

Which other milliners or artists in general do you admire?

I love Karen Henriksen in London and Rike Feurstein in Berlin. In the United States, I admire Lola Hats.

Do you wear your own hats? Or hats in general?

I can’t leave the house without wearing a hat; I feel utterly naked. I’m on my third metallic lilac Nile Perchskin helmet in three years. Hopefully I don’t lose this one.

Do you teach millinery?

I’ve been teaching workshops in the art of freeform draping since 2001, in New York City and the Bay Area (San Francisco). I also teach patternmaking for cut and sewn hats. Patternmaking is a precise art. I love math and drafting, so it comes naturally to me. I love teaching because it encourages others to take up millinery.

Do you have any other interests, hobbies?

I write poetry and perfom it into spoken word publicly. I do field recordings and make my poems into music tracks. I also re-make clothing out of cashmere.